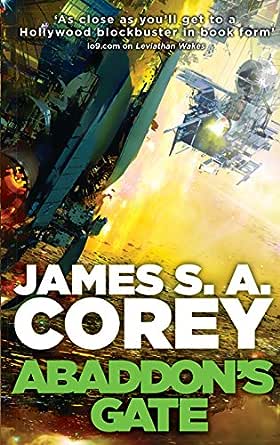 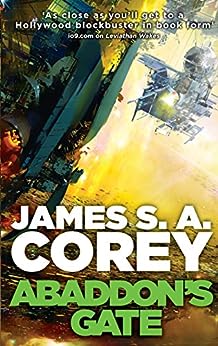 "It's been too long since we've had a really kickass space opera. LEVIATHAN WAKES is interplanetary adventure the way it ought to be written, the kind of SF that made me fall in love with the genre way back when, seasoned with a dollop of horror and a dash of noir. Jimmy Corey writes with the energy of a brash newcomer and the polish of a seasoned pro. So where's the second book?"--George R.R. Martin

"If you like science fiction with great characters and set in real space, you'll enjoy this one."--Jo Walton, author of Farthing on Leviathan Wakes

"It gnaws at your soul."--Sun on Leviathan Wakes

"High adventure equaling the best space opera has to offer, cutting-edge technology, and a group of unforgettable characters bring the third installment of Corey's epic space drama (after Caliban's War and Leviathan Wakes) to an action-filled close while leaving room for more stories to unfold. Perhaps one of the best tales the genre has yet to produce, this superb collaboration between fantasy author Daniel Abraham and Ty Franck should reawaken an interest in old-fashioned storytelling and cinematic pacing. Highly recommended."--Library Journal on Abaddon's Gate (starred review)

"Politics, philosophical ideals, and humor mingle in a tale that will shock and surprise."--Publisher's Weekly on Abaddon's Gate (Starred Review)

"[T]he authors are superb with the exciting bits: Shipboard coups and battles are a thrill to follow."--Washington Post

For generations, the solar system - Mars, the Moon, the Asteroid Belt - was humanity's great frontier. Until now. The alien artefact working through its program under the clouds of Venus has emerged to build a massive structure outside the orbit of Uranus: a gate that leads into a starless dark.

Jim Holden and the crew of the Rocinante are part of a vast flotilla of scientific and military ships going out to examine the artefact. But behind the scenes, a complex plot is unfolding, with the destruction of Holden at its core. As the emissaries of the human race try to find whether the gate is an opportunity or a threat, the greatest danger is the one they brought with them.

C.T.
5,0 van 5 sterren Not as good as the others
11 juli 2018 - Gepubliceerd op Amazon.com
Geverifieerde aankoop
ABADDON'S GATE is the third volume of the Expanse and while it promises many new and interesting developments, isn't one I enjoyed as much as the previous installments. That's not to say the novel isn't good but it has some flaws which made me think this series might be running out of steam. I hope I'm going to be proven wrong but the only way I can do that is to pick up the next volume.

The premise of the novels is humanity has explored the solar system and colonized both Mars as well as the Asteroid Belt. Unfortunately, this hasn't come with prosperity for all mankind. Poverty and conflict remain with humanity as the need for resources has become greater than ever. The conflict between the three factions has been made worse by the existence of the protomolecule, a billion-year-old alien artifact that has opened up new areas of technology as well as science. One of these is a massive celestial gate on the other end of the solar system.

A group of priests, priestesses, reverends, and other religious leaders have been assembled on a publicity mission to investigate it. Meanwhile, Clarissa Mao, daughter of Jules-Pierre Mao, plots to frame Captain Holden and the crew of the Rocinate in order to avenge her father. This frame-up job ends up forcing Holden and the crew through the gate to become the first people to see what lies
across the universe.

The mystery of Abaddon's Gate is an interesting one as we get to see hints of what species created the protomolecule and why. The continued lack of actual aliens in the series is something which is both to its benefit and deterrent. It's really a series about humanity's reactions to alien life versus alien life itself. I don't know if we'll ever solve the mystery of what happened to them but it seems very likely we will and I'm not sure that's a great direction for the series to go. Then again, I compare it to A Song of Ice and Fire. I'm much more interested in the events in King's Landing versus the White Walkers.

An interesting element is the novel it is a surprisingly religious novel. The character of Anna is a devoted Eastern Orthodox priest (or so I believe--things can change a lot in Russia in 200 years) who wants to save the soul of Clarissa Mao as well as end the fighting without further bloodshed. She spends a lot of time contemplating God, the universe, destiny, and alien life which is not the sort of thing you usually find in hard science fiction novels.

The crew of the Rocinante are decent in this book but nothing really interesting happens with them. Yes, Holden is framed but no one believes it for very long nor is there much tension from the crew. We also lack interactions with Bobbie Draper, which is a shame as I really liked her character. I will say that Holden is starting to grate on me as a character since his naked idealism only works with very cynical characters to contrast him to.

I also have to give the author's props for the fact they created the Behemoth--a converted Mormon generation ship which the OPA has turned into a completely useless military vessel. It can't fire any of its weapons due to the fact it's not structurally built for combat but it looks like it is. I will say, though, the book's handling on drug dealing offended me. One of the supposedly heroic characters spaces a man for dealing them and lost all sympathy as a result from me.

Indeed, my biggest issue with the book is the character of Bacca. One of the major plots of the book is how he has to seize power from his insane military commander who is grossly underqualified for his position. When, in fact, I think Bacca is a dangerously unstable murderer who mounts a mutiny for flimsy pretexts. When you actively hate one of the main characters and think he should fail, something has gone wrong.

In conclusion, Abaddon's Gate was....okay. I hope the next book is better, though.

SJ
2,0 van 5 sterren Really boring unless you're a fan of theological debate
7 juni 2018 - Gepubliceerd op Amazon.com
Geverifieerde aankoop
While I'm not giving up on the series, this book was astonishingly boring. I'm really hoping it's just a blip since I loved the first two books but, yeah, this book had very little going for it. The characters we've grown to love over two books suddenly became strange caricatures of themselves, making decisions that made no sense given their personalities or motivations. I don't mean decisions that turned out to be the wrong ones, I mean just weird things. In the lead up to this novel, I was never given the impression that Holden thought of himself as some sort of chosen one who was fated to be the only human being who could possibly make contact with the protomolecule, but all of a sudden in the span of a paragraph or two, he's making a huge decision based on nothing but the assumption that he's the chosen one. There are a lot of other examples, and honestly I wonder if one of the authors suddenly had a crisis of faith or something during the writing of this book because there's an extraordinary amount of time devoted to whether or not God wants them to interact with the protomolecule aliens and whether or not humans are sinners and if they've sinned coming through the ring and if they should die for their hubris and what it means about the nature of God and honestly, it was so boring I ended up just scanning most of the chapters to find the actual teensy little plot points hidden among all the bloated musings about the nature of the human soul. There are rings leading to hundreds, possibly thousands of unknown solar systems, there's mind-blowing alien technology, but you won't get to find out about any of it, because instead of all the cool stuff, this book is about people faced with really cool stuff and then getting in fights about Jesus.
Meer lezen
15 mensen vonden dit nuttig
Vertaal recensie in het Nederlands

Boots
4,0 van 5 sterren Fantastic addition to the series.
19 maart 2017 - Gepubliceerd op Amazon.com
Geverifieerde aankoop
Fantastic addition to the series. Don't let the other negative reviews put you off. Sure there are a few key characters missing in this book but it is for the better of the story (mainly Chrisjen). As a whole this book is on a much smaller scale taking place mainly in only one location but it leads to something much more amazing.

The new protagonists for this book Bull; head of security for the OPA, Anna the pastor, and Clarissa/Melba are all fantastic.

Bull, the stubborn old dependable earther who has to shoulder the responsibility without the official authority due to belter prejudiced.
Anna, the pastor with the heart of gold and compassion of an angel without the zeal of James Holden.
Clarissa, daughter of Jules Mao hell bent on revenge willing to do what ever it took to take down Holden and his crew.

Instead of having a flat out evil entity like protogen and Jules in the first two books the antagonists in this book are more in the grey area. The main antagonist can be two dimensional at times but given the extreme circumstance it isn't implausible.

Aside from the new protagonists my favorite part of the book is of course the return of (or whats left of him) the hardboiled cop, Detective Miller.

As a stand alone book I would give it three stars but if you are like me following the story and enjoyed the first two books this is a must read and the end of this book sets up the stage for something amazing.
Meer lezen
9 mensen vonden dit nuttig
Vertaal recensie in het Nederlands
Ga naar Amazon.com om alle 1.046 recensies te bekijken 4,4 van 5 sterren
Terug naar boven
Over ons
Verkoop bij ons
We helpen je graag
© 1996-2020, Amazon.com, Inc. en dochterondernemingen