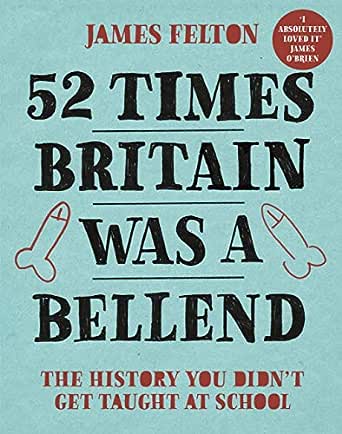 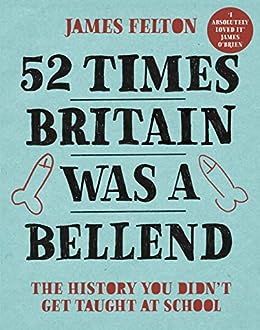 52 Times Britain was a Bellend: The History You Didn’t Get Taught At School (English Edition) Kindle-editie

Awfully hilarious about the hilariously awful. Confirms everything everyone whispers behind our backs, except funnier--Danny Wallace

Warning: may provoke huge laughs and some feelings of shame--David Schneider

James never fails to make me laugh and then think, then laugh some more--Dermot O'Leary

James Felton makes me laugh like a bellend--Robert Webb

James Felton is a national treasure. Although having read this book, I'm not sure that's a good thing--Fred Delicious

Brilliant and hilarious. The perfect book for a nation built on arseholes--Emma Kennedy

Twitter hero James Felton brings you the painfully funny history of Britain you were never taught at school, fully illustrated and chronicling 52 of the most ludicrous, weird and downright 'baddie' things we Brits* have done to the world since time immemorial - before conveniently forgetting all about them, of course. Including:

52 TIMES BRITAIN WAS A BELLEND will complete your knowledge of this sceptred isle in ways you never expected. So if you've ever wondered how we put the 'Great' in 'Great Britain', wonder no more . . .

*And when we say British, for the most part we unfortunately just mean the English.

Hande Z
4,0 van 5 sterren That's the title? Srsly?
18 november 2019 - Gepubliceerd op Amazon.com
A small, hilarious book about the bits of history British people should not be proud of. Each event is a page long with a page of nice cartoon. Some stories border on the ridiculous - like the passing of a law in 16th century by Queen Elizabeth I that compelled people to wear the bobble hat.

Others sound outright amazing if not incredible, like Charles Darwin eating endangered species on his way back from the Galapagos. In mitigation, he had not yet written his theory of evolution and therefore did not know the value of the poor creatures.

Other stories are tragic - like the story of trusting Cyril Radcliffe to draw the partition of India and Pakistan when the man had not travelled further than Paris. The result of that left millions of Muslims in India, and Hindus in Pakistan, all trying to flee to the other side of the border.

This book is a fun book and ideal for a Christmas present - but make sure you know what a 'bellend' means before you give it as a gift.
Meer lezen
Vertaal recensie in het Nederlands
Ga naar Amazon.com om alle 6 recensies te bekijken 4,6 van 5 sterren
Terug naar boven
Over ons
Verkoop bij ons
We helpen je graag
© 1996-2020, Amazon.com, Inc. en dochterondernemingen