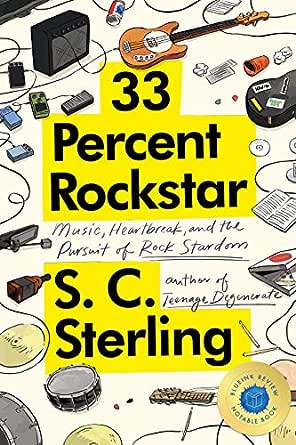 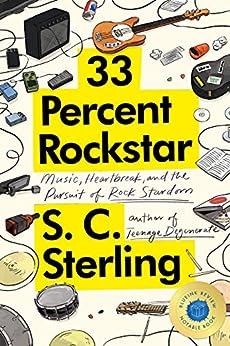 "Starred Review! 33 Percent Rockstar is an entertaining, honest look at the trials and tribulations most musicians endure -- and still fail to attain their dreams. Yet it also illustrates why the dream remains alive." -- BlueInk Reviews

"10 out of 10! Scott has a life story that is truly one of a kind. His experiences, successes, and failures while playing with multiple bands and band members are relayed in a manner that is honest, amusing, and often poignant. His personal imperfections and emotional tumult, along with the often gritty backdrop of the music world, allow for this story to be both relatable and compelling." -- The Booklife Prize

"Sterling (Teenage Degenerate, 2016) recounts his misadventures while struggling to attain rock 'n' roll stardom. The book details a blur of concerts and van trips, all soaked in beer, as life on the road brought the young musicians only privation and sleeplessness. Sterling has a natural, easygoing prose style that suits his tale of the difficulties of making it in the music world or when analyzing his own failures, which he reveals with disarming frankness. One message, though, emerges from these recollections--that the author's love of music never wavered. An earnest elegy to the band life." -- Kirkus Reviews

"33 Percent Rockstar is an entertaining, honest look at the trials and tribulations most musicians endure -- and still fail to attain their dreams. Yet it also illustrates why the dream remains alive." -- BlueInk Reviews (Starred Review)
"10 out of 10!" -- The Booklife Prize

Scott has played over 500 concerts at hundreds of venues spanning almost two decades. From performing to the bar staff at strip mall dive bars, to a sold-out show with members of The Misfits and the Ramones, 33 Percent Rockstar: Music, Heartbreak and the Pursuit of Rock Stardom is about the love of music and life as a struggling musician. It is the true story of what happens when you give up everything to follow your dreams—even when they lead to a run-down strip club in a seedy part of Lincoln, Nebraska.

Scott learned how to play the bass guitar, and became a musician. He'd eventually become a damn good one. He fell in love and got his heart broken. Twice. He played in multiple bands, recorded multiple albums, and toured the country.

In the end, Scott never made it big, but it wasn’t for lack of trying. All for the love of music, he toiled in dead-end jobs, drove across the country in dilapidated tour vans, and dealt with the fragile egos and creative differences of a rotating cast of bands and band members.

33 Percent Rockstar: Music, Heartbreak and the Pursuit of Rock Stardom is a Behind the Music for the vast majority of musicians who never achieve rock stardom and offers a glimpse of the everyday lives of those hopeful, possibly deluded souls pursuing the rockstar dream.
Alle bekijken
click to open popover

Lights with music
2,0 van 5 sterren Just because you want something doesn't mean you deserve it.
10 januari 2020 - Gepubliceerd op Amazon.com
Geverifieerde aankoop
While it was interesting reading of the authors musical life one thing repeatedly stood out. He wanted to be a "ROCK STAR" Not a musician.
He bought a guitar and assumed music would just come out of the guitar.
He thought 3 to 4 practices a week was an INTENSE schedule. Any one I know who was good couldn't put the instrument down.
Playing in a bar band for beer is not success
Yes you were in a bar band. Even though you played original music your purpose was to sell beer.
Want to know how much people enjoy your music? Play a show with no alcohol and let it be known there is no alcohol and see how many "Fans" show up to hear you.
The main goal for him throughout the book was to get drunk. Over and over that story is repeated along with dealing with hangovers the next day. Wanted to live the ROCK STAR life style but not put in the work.. It comes as no surprise he was into punk rock. The whole premise of the genre is getting good at your instrument is for losers.
Don't know if the author will ever read this but judging from the book you have a drinking problem. You might want to take a look at yourself. Or not. It's your life.

Dave Easterday
3,0 van 5 sterren Advice for all wanna be musicians
14 juni 2019 - Gepubliceerd op Amazon.com
Geverifieerde aankoop
This brought back lots of memories, and I am glad I quit when I did. You will realize Its a lot more than being able to play.
Meer lezen
Een iemand vond dit nuttig
Vertaal recensie in het Nederlands

I've known many musicians and have even gone on short tours with some. The anecdotes in this book are very close to my experiences with bands. There are many talented and determined musicians out there that never become nationally famous. They tour and work other jobs to make ends meet and often do a lot of drinking while playing and in between. They sleep in vans, sometimes on couches and rarely in hotels. You've got to love what you're doing and not be looking for monetary gain. The percentage of musicians who actually are lucky enough to support themselves with their art is very small when compared to their entirety.

This is a quick read and in many ways a fun read. My criticism of this book is the writing style. It is very episodic and the anecdotes often end abruptly leaving the reader with unresolved endings. He just skips on to the next story. The chapter headings are meant to clarify the time frame of the consequent tales, but its distracting. He may have been 33 percent rock star but he was maybe 10 percent writer.

I recommend this for anyone who wants a quick read and doesn't want to have to think about what they are reading. Otherwise, skip it.

Taylor Wilson
5,0 van 5 sterren Not your typical musicians biography
21 november 2019 - Gepubliceerd op Amazon.com
The book provides a lot of insight into the work and effort it takes to become a good musician or for chasing any dream for that matter. Scott knew what he wanted and he continued to chase it until he reached a point in his life where he knew it was time to move on. Although he technically didn’t reach 100 percent rockstardom, he still got to play with multiple bands in different genres and got to open for some bigger bands.

I love listening to music, but I also like learning about the people behind the music. This book was definitely a little different than your typical biography or autobiography. This book was more like a story, kind of diary-ish, but not exactly. I enjoyed learning about the different bands he was a part of and all the things they had to go through. The best part about the book was seeing Scott go from someone he thought had no musical talent to becoming a pretty awesome bass player.

Scott had a dream of becoming a rockstar, so after learning to play bass guitar he and his friend Jake auditioned for a band. Scott ended up playing in several different bands throughout several years, touring the country, recording a couple albums, but never really making it big. 33 Percent Rockstar is about Scott’s life as a struggling musician and his love for music. I recommend this book to anyone who likes learning about musicians and/or people in general.
Meer lezen
Een iemand vond dit nuttig
Vertaal recensie in het Nederlands
Ga naar Amazon.com om alle 7 recensies te bekijken 3,6 van 5 sterren
Terug naar boven
Over ons
Verkoop bij ons
We helpen je graag
© 1996-2020, Amazon.com, Inc. en dochterondernemingen