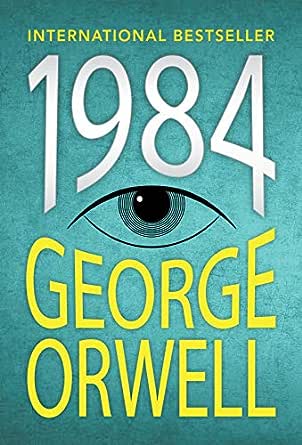 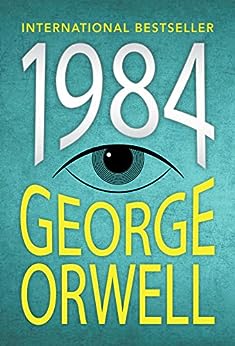 1984, published in 1949, is a dystopian and satirical novel. It revolves around Winston Smith, who lives in a nation called Oceania, in a province called Airstrip One, which represents present-day England. This state is controlled by the Party, headed by a mysterious leader who is addressed as Emmanuel Goldstein, also known as the Big Brother. The Party watches every single move that Smith and other citizens make.

The nation’s language and history is forcefully changed for the benefit of the Party. A new language, Newspeak, is being compulsively implemented to ensure works that have anything to do with political rebellion are omitted. In Oceania, even rebellious thoughts are illegal and are said to be the worst of all crimes. The people are suppressed and any form of individuality is not tolerated, including love and sex.

Smith works as a low-ranking member of the Party who alters historical records. He hates the Party and thus buys an illegal diary in which he pens down his thoughts. He meets Julia, a coworker, who seems to been romantically inclined towards him. He however doubts that she is a Party spy who will get him imprisoned for his ‘thoughtcrimes’. Her love turns out to be true and they have a covert affair. Smith’s hatred for the Party grows day by day and he is convinced that a powerful Party official O’Brien is actually trying to overthrow the present government with the help of a secret group named the Brotherhood. As the story goes on, readers learn the twists and turns that life in Oceania has in store for Smith. He faces terror, betrayal, freedom, and a broken spirit.

1984 is the author’s haunting vision of the future. The book has been adapted into television programmes, films, radio broadcasts and plays. In 2003, the book was number 8 on BBC’s survey The Big Read. It was 6th and 13th on the reader’s and editor’s list of Modern Library 100 Best Novels, respectively. In 2005, it was added to the 100 Best English Language Novel from 1923 to 2005 by TIME magazine.

Eric Arthur Blair, better known by his pen name George Orwell (1903–1950), was an English author and journalist. His work is marked by keen intelligence and wit, a profound awareness of social injustice, an intense opposition to totalitarianism, a passion for clarity in language, and a belief in democratic socialism.

In addition to his literary career Orwell served as a police officer with the Indian Imperial Police in Burma from 1922-1927 and fought with the Republicans in the Spanish Civil War from 1936-1937. He was severely wounded when he was shot through his throat. Orwell and his wife were accused of 'Rabid Trotskyism' and tried in absentia in Barcelona, along with other leaders of the POUM, in 1938. However by then they had escaped from Spain and returned to England.

Between 1941 and 1943, Orwell worked on propaganda for the BBC. In 1943, he became literary editor of the Tribune, a weekly left-wing magazine. He was a prolific polemical journalist, article writer, literary critic, reviewer, poet and writer of fiction, and considered perhaps the twentieth century's best chronicler of English culture.

Orwell is best known for the dystopian novel Nineteen Eighty-Four (published in 1949) and the satirical novella Animal Farm (1945)—they have together sold more copies than any two books by any other twentieth-century author. His 1938 book Homage to Catalonia, an account of his experiences as a volunteer on the Republican side during the Spanish Civil War, together with numerous essays on politics, literature, language, and culture, are widely acclaimed. In 2008, The Times ranked him second on a list of 'The 50 greatest British writers since 1945'.

Truth Seeker
5,0 van 5 sterren A Message To Young Readers Who Have Been Assigned This Book
17 juni 2018 - Gepubliceerd op Amazon.com
Geverifieerde aankoop
This is one of the first books I have read more than once. I first read "1984" in 1985 and now for the second time in 2018. The book has remained the same, but both the world and I have not. I cannot begin to convey how genuinely frightening this book is. I am a lover of popular science fiction and am astounded by Orwell's ability to be more compelling, entertaining and engrossing than authors with the benefit of light sabers, phasers and teleportation.

To every young person who has been assigned this book, know that you are reading a literary work of art. Many of you will understand and appreciate it, but if you love literature, please make a mental note to read this again when you are older. Youth brings with it eternal hope, boundless optimism and of course, hormones, so you will find yourself rebelling against the pessimism of the book itself - you will effectively be Winston raging against the machine, hoping, searching, questing for a way out. In short, you will cheat.

But when you get older, have a family, lose loved ones and see some of your dreams unfulfilled - when you witness entire nations and races of peoples born, live and die in brutal squalor - when you reflect on the technological advances made over the decades and gaze, with mouth agape, at how a people can be less advanced, less informed and less enlightened, not despite these innovations, but BECAUSE of them, then you will read 1984 as it was meant to be read...not as a dark, dystopian world you enter when you open the book, but a beautifully brutal warning that, even as you read it, is prophetically coming true around you.

Amazon Customer
4,0 van 5 sterren Does 2+2 really equal 4?
1 december 2017 - Gepubliceerd op Amazon.com
Geverifieerde aankoop
1984 is a thrilling classic novel by George Orwell that brings readers into a dystopian society where citizens know “Big brother is watching you.” (Orwell 2) The book follows Winston Smith as he secretly denounces the all-powerful government, Big Brother, and decides to live a daring life of scandals and secrets. As expected, Big Brother catches Winston, and tortures him ruthlessly until he is a shell of his former self. Although the storyline itself is exhilarating enough to make readers want to turn the next page, it’s really the larger message that makes this read so worthwhile: extreme political philosophies, like Big Brothers’ totalitarianism, are no good. I will admit at times I felt I didn’t even like Winston, like when he first saw Julia, his lover, and told her “I hated the sight of you...I wanted to rape you and then murder you afterwards.” which shows misogyny in the most unsettling way, and when he kept dismally repeating that “there was no escape” from death because of his love affair (Orwell 120, 152). Regardless of whether or not the characters are relatable, the book definitely serves as a cautionary tail to all those who have scanned it pages. This book has many horrifying elements and scenes, such as telescreens, the things constantly watching people even in their own homes. Newspeak, Big Brother’s official language, is also very unsettling, as the government controls what people say and think without them realizing it, because the words to think bad thoughts do not even exist. However, limited language and stalking screens are nothing compared to the awful dehumanization that Big Brother inflicts on those who don’t agree with them. When brought to room 101 in the Ministry of Love (how ironic of a name), Smith was subjected to “the worst thing in the world,” as O'Brien recalled, almost killing Winston using his worst fear (Orwell 283). This turned Winston into what seemed like an animal with rabies, and after this punishment (in which he was spared death because he betrayed his lover Julia) he was never the same.

Perhaps, though, the scariest thing about this novel was that I didn’t find it all that scary. Many things Orwell brilliantly predicted are a reality now, like cameras in the pockets of nearly every person in a developed country that could potentially “see” and “hear” everything. Phones like the iPhone not only have fingerprints (for touch identification) but now are starting to delve into the world of facial recognition, and no one truly knows for sure where this information goes. We see far worse things than Winston saw in the Ministry of Love by simply turning on the news. Nations like North Korea have complete control over their citizens, and the saddest part is, these citizens are too shielded from reality to even know that there is something wrong with the way they are treated. People also have the tendency to blindly trust whatever the media says, which could just be another way us people are manipulated every day. It makes me wonder, is 2+2 really 4… or, because numbers are a concept created by man, could it really equal 5?

Hannah Avarraschild
4,0 van 5 sterren Worried about 1984? Check out "It Can't Happen Here."
30 januari 2017 - Gepubliceerd op Amazon.com
Geverifieerde aankoop
I read this in high school (I'm 72 now) and at that time it was a prediction of things to come. In some ways it's pretty close. It is interesting that people are reading it more now because of the current situation. I think that if they are alarmed by this book they should try "It Can't Happen Here."

Eliza Doll
5,0 van 5 sterren My favorite book for almost 20 years
7 mei 2017 - Gepubliceerd op Amazon.com
Geverifieerde aankoop
I first read 1984 for a high school English class almost 20 years ago, I was immediately drawn to Orwell's writing style. For every bit of dialog, there is MUCH more narration, but the narration is engrossing and intriguing. I love when Orwell uses long sentences with parallel phrasing, and he describes in detail a society that is frighteningly much like our own-- a crushingly intrusive government that uses constant and inescapable surveillance paired with a steady stream of falsehoods marketed as truth that caters to the 1% (the Inner Party) while the lower castes (the Outer Party and the Proles) suffer in poverty and neglect. If you're like me and love a good bleak novel that explores the basic depravity of man (other favorites of mine are Brave New World and Lord of the Flies), read 1984. Don't forget to give Animal Farm a try as well; it covers very similar themes using talking barnyard animals, but it's an easier read. Better read this book quickly because Big Brother Is Watching You.
Meer lezen
100 mensen vonden dit nuttig
Vertaal recensie in het Nederlands
Ga naar Amazon.com om alle 7.288 recensies te bekijken 4,5 van 5 sterren
Terug naar boven
Over ons
Verkoop bij ons
We helpen je graag
© 1996-2020, Amazon.com, Inc. en dochterondernemingen